José Eduardo dos Santos, aka JES, was once celebrated as the country’s peace architect who stabilised the country from years of civil war. But by the time his death was announced on Friday, July 8 at 11.10 am Spanish time, most of his fans or supporters had abandoned him. He was 79.

Where he was once venerated as a statesman, it had been replaced with clouds of scandal and controversy that followed him shortly after he left office in 2017.

Dos Santos had been sick and admitted to a hospital in Barcelona for several weeks and even the Angolan government had confirmed it but claimed he was in stable condition.

On Friday, President Joao Lourenco’s office said the country was in “great pain” after the death of a leader he described as “a statesman of great historical dimension.”

Mr Lourenco spoke of Dos Santos as a man who “governed for many years with humanity and always had the destiny of Angolans at heart in many difficult situations.”

The statement did not confirm what killed him but the former leader had been in and out of hospital for respiratory problems as well as cancer complications. He died at the Teknon Centre in Barcelona.

His death may have been expected, just not far away from the land he dominated and ruled like his personal corporation. 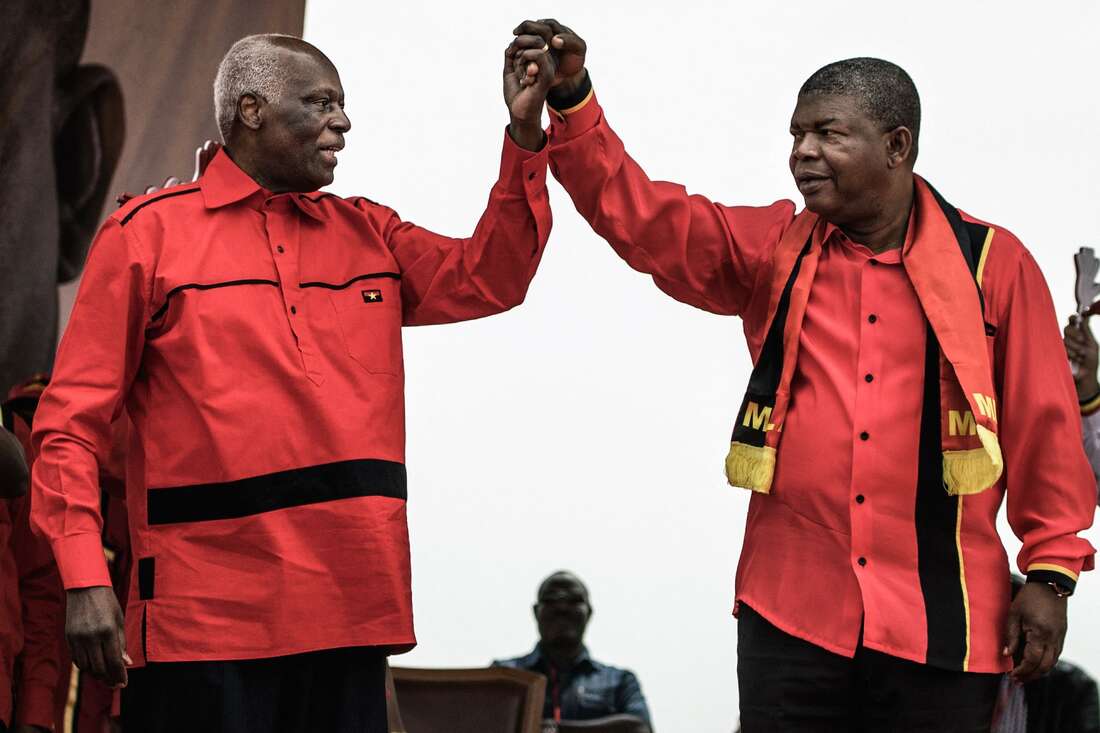 In this file photo taken on August 19, 2017 then Angolan President and The People's Movement for the Liberation of Angola President Jose Eduardo dos Santos (left) and MPLA candidate to the presidency Joao Lourenco hold hands during the closing campaign rally in Luanda. PHOTO | AFP

After serving for 38 years in power, Dos Santos stepped down in 2017, handing power to Mr Lourenco, his longtime ally. His successor though would show true colours by digging into Dos Santos' closet, investigating corruption. The cloud gathering around Dos Santos’ misdeeds in the past forced him to leave the country on April 16, 2019, officially for medical treatment in Spain.

He stayed in Spain for the remainder of his years, only returning to Angola occasionally. His years in power are what many Angolans remember most. When he left in 2017, the country’s key sectors like education and health were in tatters, in spite of Angola being only second to Nigeria in Africa’s oil production. Some think that legacy is the reason even he himself had to seek medical attention abroad.

Dos Santos was born on August 28, 1942, in Luanda´s Sambizanga municipality, although some opposition figures as well as rights group members say he was born in Sao Tome and Principe, another former Portuguese colony, only coming to Angola in early childhood.

He made his own history to become president at the age of 37. He left after 38 years in power -- from September 21, 1979, to September 26, 2017— being also Commander-in-Chief of the Angolan Armed Forces as the Constitution states.

He attended primary and secondary school at Luanda´s Liceu Salvador Correia and joined the ruling People's Movement for the Liberation of Angola (MPLA) in 1958 before beginning his political activity as a member of clandestine groups that fought against colonialism.

In 1962, JES joined the MPLA's armed wing, and in 1963 was selected as the first party’s representative in Congo Brazzaville. In November of the same year, he travelled to the former Soviet Union to study Oil and Gas at Baku Institute, today’s Azerbaijan. He graduated in 1969.

While there, he also studied military telecommunications. His love for Russia went beyond education. His daughter Isabel was born to a Soviet woman he met while on a study tour. It is Isabel who remained powerful through his reign, and one who has been the public face of a scandal that followed Dos Santos in retirement. The Angolan government froze assets in her name as it chased after the wealth reportedly accumulated while her father ruled the land.

Before Dos Santos rose to the presidency, however, he had been the head of telecommunications for his MPLA and its military wing, between 1970 and 1974, in Cabinda province, the Angolan enclave surrounded by DR Congo. But started rising fast. In September 1974, he was picked up as a member of the MPLA’s Central Committee and Political Bureau.

In June 1975, he started coordinating his party’s Department of Foreign Affairs and Health.

As Angola became independent on November 11, 1975, he was appointed the country’s Minister of Foreign Affairs by President António Agostinho Neto. He replaced Neto who died on September 10, 1979.

He was elected President of Angola and leader of MPLA, which also meant he was commander-in-chief from September 20, 1979.

From 1986 to 1992, José Eduardo dos Santos played a leading role in solving the cross-border crisis between Angola and South Africa, which led to the repatriation of the Cuban army from Angola, the independence of Namibia, and the withdrawal of South African troops from Angola.

He married Ana Paula dos Santos in 1991, with whom they were last seen together publicly in 2019. The marriage took place after divorcing the Russian Tatiana Kukanova, the mother of Isabel, with whom he had a relationship between 1966 and 1979.

In September 2010, he denied a claim by a Congolese woman that he was her father. The episode happened when Ms Ngutuila Josefa Matias arrived in Angolan capital Luanda and tried to arrange a meeting with the President stating publicly that she was his daughter.

Dos Santos explained then that he had moved to the Democratic Republic of Congo in 1961 during Angola’s fight for independence from Portugal but denied having a love affair with a Congolese woman during that time.

He lived in DRC for three years. “I never had any girlfriend or lover. At that time all I thought about was completing my studies,” he said in 2010.

Angola had tried multiparty elections since 1992 but it is only after Dos Santos left that it, sort of, improved. Back then, Dos Santos and opposition leader Jonas Savimbi of Unita competed in the second round. Dos Santos won and the US was among the first Western allies to recognise the winner.

But Unita, translated as Union for the Total Independence of Angola in English, did not acknowledge the polls' results and returned to war. It lasted until 2002.

JES is nicknamed by many Angolans as the 'peace architect' because of his ability to negotiate with his opponent to end the war.

Dr Savimbi was killed in battle against the government forces in Lucusse region on February 22, 2002, aged 67.

The Unita leader's death paved the way for a peace deal that ended one of Africa's longest and bloodiest civil conflicts, which erupted after independence from Portugal in 1975. The war left at least half a million people dead and some four million civilians displaced in the oil-rich nation.

But Dos Santos remained in office, without constitutional legitimacy until 2008 when the country held the second polls since independence and his ruling MPLA won with a large majority. However, two years before that, he performed a historic feat worthy of note.

On August 1, 2006, under his leadership, the government inked an MoU for Peace and Reconciliation with a rebel group, the Front for the Liberation of the Enclave of Cabinda (Flec).

Flec had been fighting for the independence of Cabinda province for four decades. The Cabinda region produces up to 70 percent of Angola's oil revenues which makes up half of the country’s GDP.

Again, on August 31, 2012, Dos Santos and his ruling MPLA won the polls. He agreed to quit five years later. In 2017, President João Lourenço took over following the August 23 general elections marking the end of a 38-year reign for JES.

Soon after, President Lourenço started implementing his anti-corruption agenda that has seen several associates of his predecessor implicated in wrongdoing. A number of JES’ kin and allies were dismissed from key government institutions as a result of the campaign.

For instance, leaked documents showed in 2020 how Isabel, got access to lucrative land, oil, diamond and telecoms deals when her father, Jose Eduardo dos Santos was president.

New York-based International Consortium of Investigative Journalists (ICIJ), which published the ‘Luanda Leaks’ fingered Isabel dos Santos, for looting her own country and using firms around the world to clean her money.

Last year, the US Department of the Treasury designated two of JES´ close allies as target corrupt individuals in a list of fifteen other individuals across Central America, Europe, and Africa.

According to the US agency, Leopoldino Fragoso do Nascimento and Manuel Helder Vieira Dias Junior, government officials under Dos Santos' regime stole billions of dollars from the Angolan government through embezzlement.

After he left office, Dos Santos retreated to a quiet life, rarely making public appearances. He had lived through his rule rejecting interview requests from the international media, leading some to speculate he was also generally shy. After his retirement, Isabel spent considerable time in the media fighting fires against her family.

At the time of his death though, former first lady Ana Paula dos Santos was among family members who were by his bed.

Pope will also meet victims of violence as well as members of the clergy and charities operating in DR Congo.

Kenyatta again implored on the warring factions to immediately end their hostilities and return to dialogue.

Off day in Kinshasa as Pope arrives